An adorable spaniel sat at the entrance of a shop, gazing out solemnly at the people milling about in Bhaktapur’s Durbar Square. It looked very different from the other dogs who made their home here.

Being a dog lover, I would have loved to stop and click photos of every pooch in Nepal. Had I done that, I would have got left far behind by my group, a bunch of travel experts and content creators attending the Himalayan Travel Mart 2018 in Kathmandu.

We were on a FAM tour that included Bhaktapur – Nepal’s cultural city – a collection of exposed brick houses linked to each other by a network of red brick roads that were surprisingly clean, if not always evenly laid.

Bhaktapur’s history goes back to the early 8th century when it was the capital of Nepal till the 12th to 15th centuries. Until the early 18th century, the city was almost like a country unto itself, surrounded by boundary walls and city gates.

Most of Bhaktapur’s 100,000 citizens are peasants, with businessmen, handicraft producers and public employees making up the rest of the population.

Bhaktapur’s Durbar Square is a World Heritage site, and it was well worth the trip on our walking tour of this ‘Living Museum’ of Newari culture.

As I strolled through the narrow red-brick lanes lined by red-brick houses, with doors and windows framed by intricate and ornate wood carvings, I felt like I was stepping into a land that Time had forgotten.

Our guide, Mr Badri, told me that the Government offers subsidies to those who build homes in the traditional style. It’s a good way of keeping these ancient cultural traditions alive, especially for tourists like me, who were seeing it all for the first time.

During the earthquake of 2015, this ancient city sustained severe damage. Many buildings collapsed and many people lost their lives.

Unfortunately, some people have not managed to rebuild their homes and still live in shanties, while basic services, like a regular water supply, are also lacking.

We saw a number of women lined up behind a water tanker brought in to supply water. It was quite a depressing sight and a sharp reminder for us visitors of the extent of the devastation.

Despite these hardships, the people of Bhaktapur seem a contented lot. Besides the craftsmanship and the adorable animals, watching and photographing the people of the city became my next favourite thing to do.

We spent some time in the main Durbar square, checking out the exceptionally intricate carvings, metalwork and terracotta work on the temples and houses of worship.

After our tour of Bhaktapur, we returned to Kathmandu to visit the Patan Durbar Square. I will cover that in the next post, so do subscribe for updates. 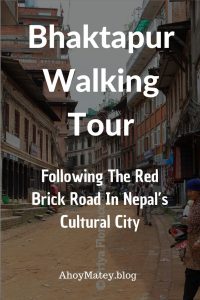 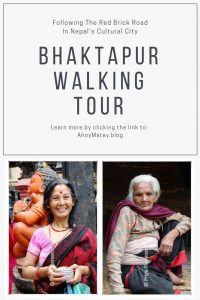